Julie has had two of her reports, Environmental Evidence and Pine Marten, published in the Norfolk Bird and Mammal Report 2016, produced by the Norfolk and Norwich Naturalists’ Society, ISSN 0375 7226, price £12. Thank you, Julie.

Juie has been visiting us regularly throughout the year and been studying a huge amount of ceramic tiles and building material. Her report on all those hours of work can be found here. Julie’s in-depth work has given us a fantastic picture of what was happening  at Woodgate 1700 years ago and her work and enthusiasm is much appreciated. She will be joining us during our August adventure this year – wonder what she will find next?

Well, not quite, but Julie has found an interesting paw print on one of the pieces of ceramic building material from kiln 2, this time it is that of a pine marten. Not all of the foot has registered, but this can vary depending on movement of the animal and on the consistency of the surface taking the print, on this CBM the clay might have been quite dry. The showing of just the toes would suggest the marten was leaping, which is typical of a hunting animal. She has produced this great drawing, too, to go with her full report which can be found here. What will she discover next ??! 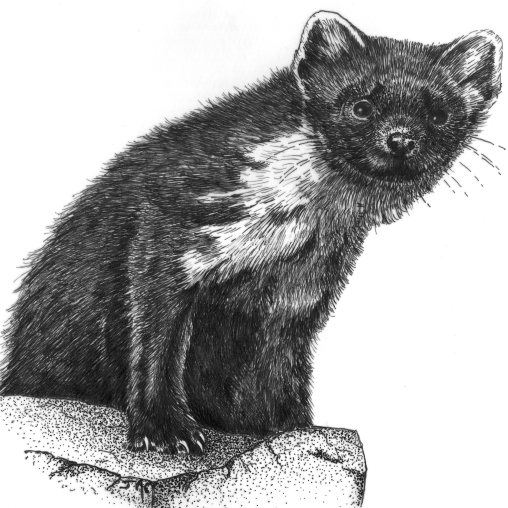 Julie has literally been beavering away. What was considered to be a bone tool has turned out to be a beaver tooth! Below, is Julie’s summary. For the full report click here.

A single lower incisor from Beaver (Castor fiber) was found in the waste pit close to the Roman kilns at Woodgate. The tooth has been heavily worked, cutting it and trimming to produce a small rectangular piece just under 25mm in length, with a point at one end. The trimming suggests it might have been intended for a mount to hang as a pendant or amulet. No evidence for a mount has been seen, so it may have been an amulet in a small bag. Teeth of many animals would be worn and thought to protect the wearer’s teeth, with Beaver teeth known to be especially strong and valuable. 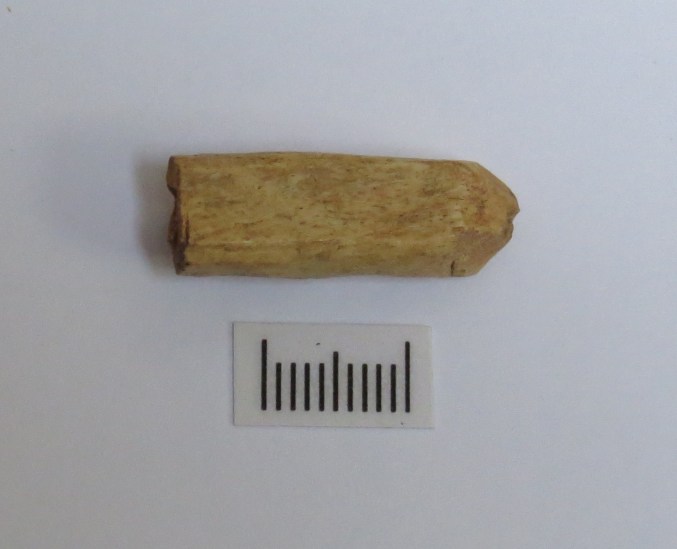 While Beavers were native to Britain, their numbers appear to have declined by the Roman period. Beavers seem to have increased in numbers slightly in Saxon times, before becoming extinct in the UK in the Medieval period. Roman Beaver finds  are rare and this object is the first known Roman Beaver from Norfolk.

It is not certain if this Beaver tooth is from an animal living at Woodgate and it is possible the owner of the object could have carried this for many years and brought it to the area. A full report has been produced, but research with this exciting find will continue….

Animal Bones in Archaeology and The Aylsham Roman Project

Read Julie’s full and detailed report about the bones discovered during the August dig 2016 by downloading this document. Animal Bones in Archaeology and The ARP

This is the tile Julie was asked to look at, taken with a rule showing its width to be 20cm.

Take a look across the middle of tile, it looks like something with a tail moved along while it was setting.

To the left of this are some indents of some sort. 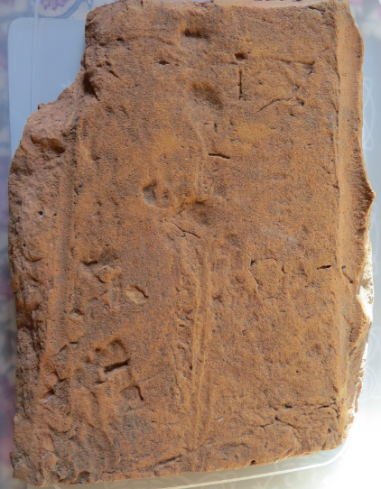 Here it is again, larger, but the other way round.

The marks can be seen much clearer now, going from top to bottom.

With Julie’s eye for detail, she has been able to determine that it is a tail and marks to side of it show it to be a great crested newt.

As it moved across the tile, it met with a fox cub – the prints are the deeper marks at the top. Unfortunately it didn’t live much longer!

Looking very carefully, Julie has been able to create a detailed image showing the different markings and what they are on this one small piece of tile.

A brief but amazing snapshot.